Lords of Corruption by Kyle Mills 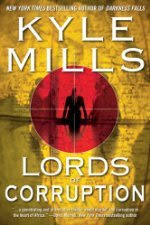 Josh Hagarty gets a chance at a job in Africa helping a charity. He's not sure it's a good idea but it sounds like it pays well and they're willing to help send his sister to college. Once he arrives, he finds out the true reason for the last guy's death and things aren't as they appear. Yet he wonders if there is anything he can do. The organization threatens the life of his sister and the only help comes from a woman who works in Africa as well as a journalist. Josh isn't sure who he can trust. All he knows is that he has to try or he won't survive.

Mr. Mills has a fantastic thriller on his hands. He kept things moving at a good pace and didn't get too gory. Things that happened in the book weren't always pleasant but it was never in detail which helped me get through it. The bad guys in this book were truly horrible. They had ulterior motives and things were presented so that it could be followed. I was never confused with what was happening.

I felt awful for Josh. All he wanted to do was provide for his sister and give her the life he never had. Yet at every corner, there were obstacles in his way. He had to figure out what was more important and deal with some very moral issues. No one is perfect but Josh did try his best to stick with what he believed. Annika was a wonderful woman who had spent many years in Africa in a small village. She was a huge help knowing the language and got them out of some tricky situations. Yet it was never sure if their lives were safe.

To think that there are corrupt charities out there breaks my heart, yet I know not everyone has the right reasons when starting one. This book presented a very real picture and kept my heart pumping. There were times I wanted to put the book down but I kept picking it back up to find out what would happen next. Mr. Mills knows how to keep you glued to the book to the very end. The coarse language got annoying after all but I know authors must stay true to how the characters talk. I am definitely thinking about reading more of his works.

Well off to start The Boy in the Stripped Pajamas and then hopefully onto something a little on the lighter side of things.
Posted by Lover of Books at 10:51 AM No comments: