The Sword in the Stone by T.H. White 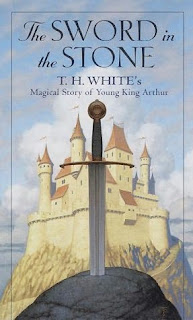 Wart, or Arthur, is training to be a squire under the eyes of Sir Ector's watch. Sir Ector's son Kay will become a knight. When in the forest going after a lost hawk, Wart meets Merlyn. Merlyn becomes the new tutor for Wart and Kay. The adventures range from fun to mind boggling. Wart has much to learn and Merlyn is there to help him. There are also things of that time period, jousting and such that must be found time to learn as well. Will Wart be able to take his place at the new king?

Mr. White created a world that took some time to get used to. Having not read a children's classic in awhile, I had to get used to the vernacular all over again. Once I was able to follow it, the stories unfolded and I couldn't get enough. Mr. White truly knows how to get you to step into another world with ease. He takes all different kinds of characters and historical people to make this story work. I was truly pleased.

The Young Wart, Arthur, was shy at first. He knew what his station in life would always be due to the fact that he didn't know who his parents were. Sir Ector was kind enough to take him under his wing. Yet there were certain things Wart knew he'd never do. Or so he thought. Merlyn was a fantastic character! I loved seeing a new take on Merlyn. The other characters of King Pelinore, Sir Ector, Madam Mim and others brought the cast to a completion. The range of their personalities were fun to watch unfold.

The adventures were so much more fun than the Disney movie. I was truly impressed with how much was followed yet the things that were left out were my favorites. The beginning dragged for me but by the end, I was sad to see it end. This was a fun romp in period fiction and I am curious to see what else was written by this author. I wouldn't read this to anyone under the age of 10 only since there is some coarse language used. There were times I was surprised I didn't burst out into song with all the bits of songs that were part of the story!

Off to a mystery, need a change of pace!
Posted by Lover of Books at 10:55 AM No comments: