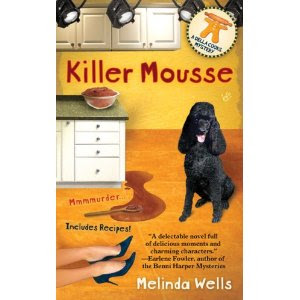 Della Carmichael runs a cooking school and gets the chance to run a cooking TV show. But when the former show host drops dead on set after tasting Della's mousse, she looks a little suspect. Della claims being innocent since she had not met the original host previously. Now she wants to work hard to prove what she is saying.

Ms. Wells has a wonderful start to this mystery series. The twists and turns in this book were amazing. I had no clue who the killer was until it was revealed at the end. I was shocked! The characters had quite the range of personalities and it made the book so more appealing. I loved that how clean it was for a cozy. If there was romance present, it was kept behind closed doors. Emotions were rampant in this book of a wide variety. I also was happy to see the recipes in the back of the book.

Della struggling over losing her husband two years previous takes the offer of a cooking show. She loves to cook and it helps her work through her emotions. She is such a sweetie and for the most part a very intelligent woman. She does have one moment of stupidity towards the end where she really wasn't thinking. Liddy, Della's best friend, is her voice of reason. When emotions are starting to build between Della and another character, Liddy is able to tell her to watch what she does. These two women made the best friends. The other minor characters like Eileen, who stayed at the house with Della was a sweetie. You really got to know quite a bit about her.

I truly enjoyed this book and can't wait to read the next one. Being set around Halloween made this a fun October read. I hope the new relationship presented in this book blossoms in the next one. But I guess I'll have to wait and see what Ms. Wells cooks up next.

This was such a fun read. I'll start my next entry for Fright Fest next week!
Posted by Lover of Books at 12:41 PM 3 comments: 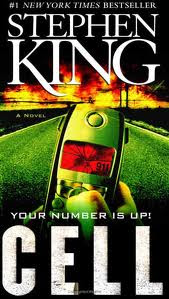 Clay Riddell just left a wonderful business venture from a graphic arts company. He cannot wait to get back to his hotel to call his ex-wife and son. In the heart of Boston, all hell is unleashed with simple cell phone calls. Clay doesn't understand what is going on but people are turning into mindless creatures. All Clay wants to do is to get home to check on his family. That may not be as easy as he thinks.

Mr. King is quite talented at writing books that really make you freak out. The best thing in my mind is that it sticks with you. He also does not use a lot of words. The way that man can write just blows me away. His imagination is deep with what he is able to create in every single story. His characters have depth and emotions that have a wide range. There is a lot of gore but it may not run through out the entire book. That is the part that pleased me the most in this book. To have a good horror novel, you need some gore but not too over the top. There was a few moments but all in all, it wasn't as bad as some others I have read.

Clay Riddell had one mission. He needed to get back to his family to see if they had come out of this event unscathed. He had feelings that they might not have but no matter what he needed to see it for himself. He didn't want to rely on his emotions since so many other things were going wrong. He found a friend in Tom McCourt who he saved from one of the mindless creatures. Tom didn't want to leave all that he had. Yet he knew when he found a friend. There were a lot of big decisions made in this book at every turn. It was definitely a survival of the fittest as well as those who didn't use their cell phones.

As much as this book intrigued me, the ending was way too abrupt. It upset me that I had made it all the way through the book to have a lot of things hanging in the balance. The gore did get a little too much for me since this is not a genre I typically read. But the premise intrigued me so much that I had to read it to find out how it would envelop over time. Mr. King truly had a good novel for the most part no matter what other people may say. It just frustrated me with how it ended. I was hoping for so much more and had a major letdown. I know not everything can end well but the build up to the end seemed like there would be so much more to it than what I was left with after all. I will definitely pick up more of his work in the future but it may be awhile before that will happen.

Though I didn't finish in time for week one which stinks. I am hoping better for this next week. As long as I finish all four books before the month is up, I am happy. :) Off to the next book!
Posted by Lover of Books at 8:41 PM No comments: 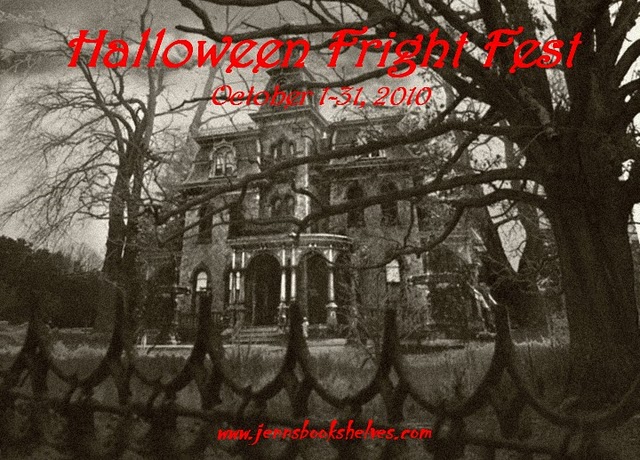 I have been looking for a Halloween Challenge. So I am challenging myself to read four books, one a week. :)

Here they are:
Cell by Stephen King
Revenant by Caroylyn Haines
Carbs and Cadavers by J.B. Stanley
Killer Mousse by Melinda Wells

I own the first two so that will be a great jump on it. Will start one of them tomorrow!
Posted by Lover of Books at 9:27 PM No comments:

I had soo much fun with this one. I challenged myself to read between 7 and 10 books. I read 8! Here they are:
The Fashion Hound Murders by Elaine Viets
Double Shot by Diane Mott Davidson
Dark Tort by Diane Mott Davidson
Throw Darts at a Cheesecake by Denise Dietz
Beat Up a Cookie by Denise Dietz
Death and The Easter Bunny by Linda Berry
Death and the Hubcap by Linda Berry
Murder is Binding by Lorna Barrett

I had a blast! I would link to reviews but I do not know how. I just started Eat Pray Love by Elizabeth Gilbert. I hope to enjoy this one. I still would like to finish up the Goldie Bear series by Diane Mott Davidson this year.
Posted by Lover of Books at 5:55 PM No comments:

Cozy Mystery Challenge: I wanted to read 7 to 10 book and I read 8! I'll make a wrap up blog tomorrow.

Off to go start my book club book Eat Pray Love!
Posted by Lover of Books at 8:50 PM No comments:

Monkey with a Tool Belt by Chris Monroe 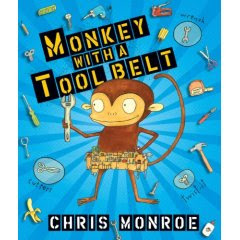 Chico Bon Bon is a monkey with a tool belt. He fixes anything and if he makes a mistake he'll fix that too. An organ grinder finds Chico and kidnaps him to make Chico his new show monkey. They take a long trip to the circus. Can Chico get away with the help of his tool belt?

Ms. Monroe wrote a fantastic and imaginative story. My six year old picked this book out of his school library for the title alone I am sure. He read most of the book but once the organ grinder had kidnapped Chico, there were too many words for him to read. So I finished up the book.

He laughed and really seemed to enjoy the book. I loved the illustrations. They were very well done. The tools went from the ones I have heard of to ones I am sure she created. But every tool on Chico's tool belt had a purpose. I see there are more in this series and I would love to see what Chico does next!

FTC: My son got this from his school library. I can't wait to finish the book he got from the library today!!
Posted by Lover of Books at 3:31 PM No comments: